Improve the Austin 311 app experience for all Austin residents to reflect their mission to provide uncomplicated access to city services and information.

An app redesign that includes a status timeline on a user’s submitted requests, the reorganization and the renaming of existing, relevant information, and the addition of alerts and news.

I collaborated with two other designers on research, wireframing, and testing. 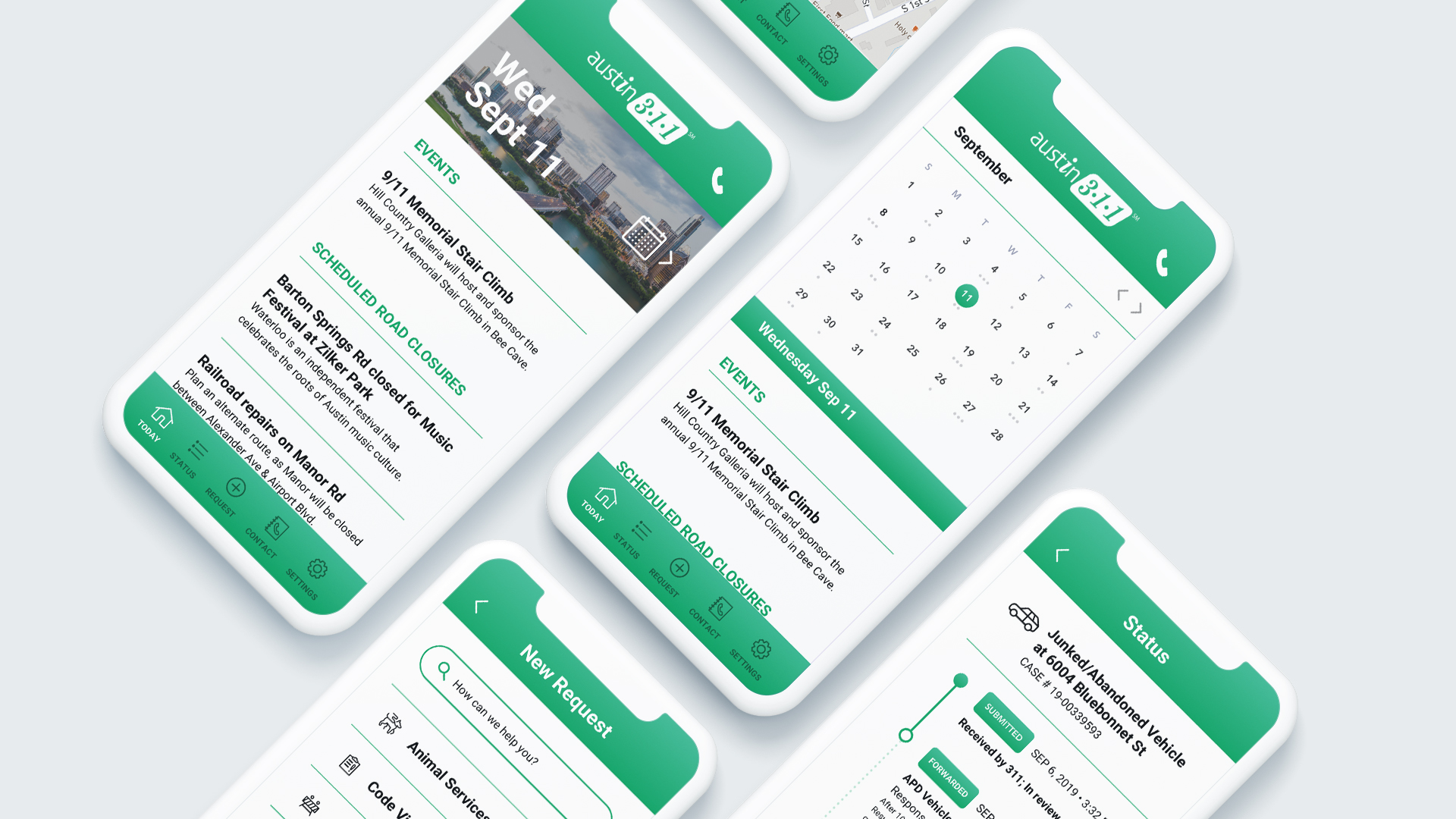 In 2014 the City of Austin launched the Austin 311 app to provide easier access to its services. The app, released with the best of intention, was met with harsh criticism. The city added improvements three years later, but that failed to address the main frustration users expressed: their requests were marked as closed without followup or resolution.

What we thought would be an exploration in adding a feature soon became an ambitious redesign. We had to give Austinites an app they deserved, one that embodied the technological know-how of the fastest-growing, tech-centric city in the country without losing sight of the less experienced tech users.

The City of Austin begins using 311 for non-emergency calls

Austin 311 releases improvements to the app after dissatisfied criticism

Austin 311 provides uncomplicated access to city services and information and is aligned with the City of Austin's goal to become the best managed city in the country.

Since 2014 the Austin 311 app remained mostly the same, while the city’s population grew (and continues to) at a rate of around 100+ people per day, or approximately 50,000 a year. The app struggled to fulfill user expectations when it was launched and, if it remains the same, will continue to leave residents—natives and transplants alike—wondering if the city really values their mission to make Austin a better place to live.

Fulfill Austin 311's mission to provide uncomplicated access to city services and information with an app experience designed for all Austin residents.

Our goal for the project was to realize this key phrase from Austin 311’s mission statement: provide uncomplicated access to city services and information.

How could we improve the existing functionality and provide the critical, missing information in a way that bridges the generational gap of the Austin population? 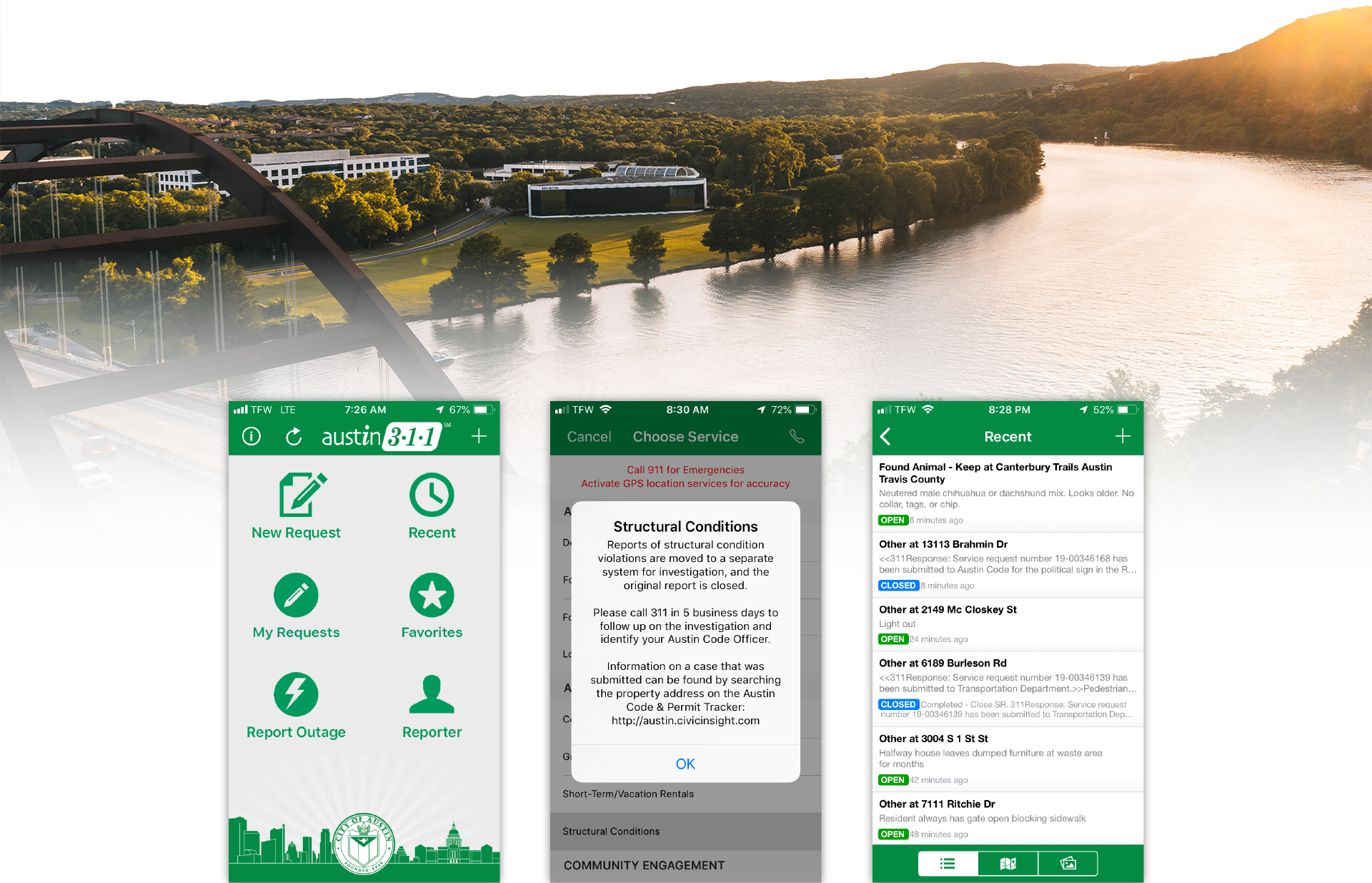 screens from the current Austin 311 app

Understanding how 311 operates and how residents use the service.

During our initial ideation, we identified the current app’s lack of information as a major shortcoming. The ‘i’ in the Austin 311 logomark is stylized to symbolize information, yet the app was vacant of any content beyond service requests and ambiguous settings. After diving into the app’s history and affinity mapping 60+ reviews it was clear that the true issue we needed to solve was the primary goal of the app: empower citizens to conveniently report issues to the City of Austin with ease.

The majority of negative feedback pertained to the questionable status of reviewers’ requests. One of the many one-star reviews stated

“They mark legit issues as "closed" even though there is no response, resolution or even explanation.”

The concerns and confusion among citizens were enough to catch the attention of the local news station KXAN.see coverage here 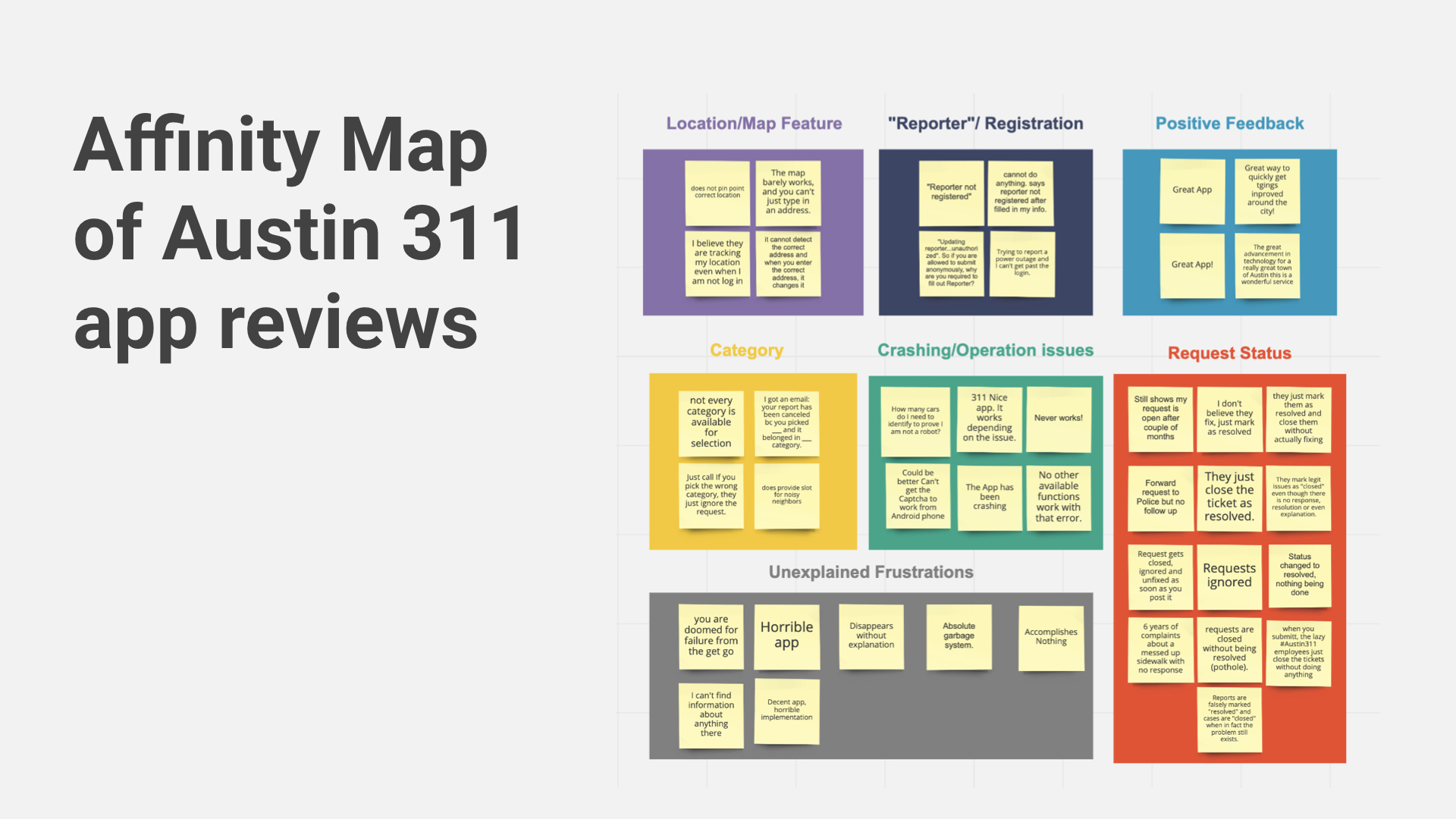 What can we learn from others in the space?

We conducted a comparative analysis of other city services in Austin and the 311 apps of Boston, New York, Chicago, and San Francisco.

A colleague clued us into a podcast that discussed the creation of Boston’s 311 app. This episode enlightened and inspired us, but when we opened the Boston 311 app for the first time we were met with disappointment. It was almost identical to Austin’s. Clearly, these were white-label apps slightly modified with branding. The apps of New York and Chicago were much more robust and city-centric and included plenty of useful information. These cities had clearly invested in their apps. Not only were they tools to report issues, but they were helpful and informative about city amenities and happenings. The Austin 311 app was not a good representation of the city’s goal to be the best-managed city in the country. 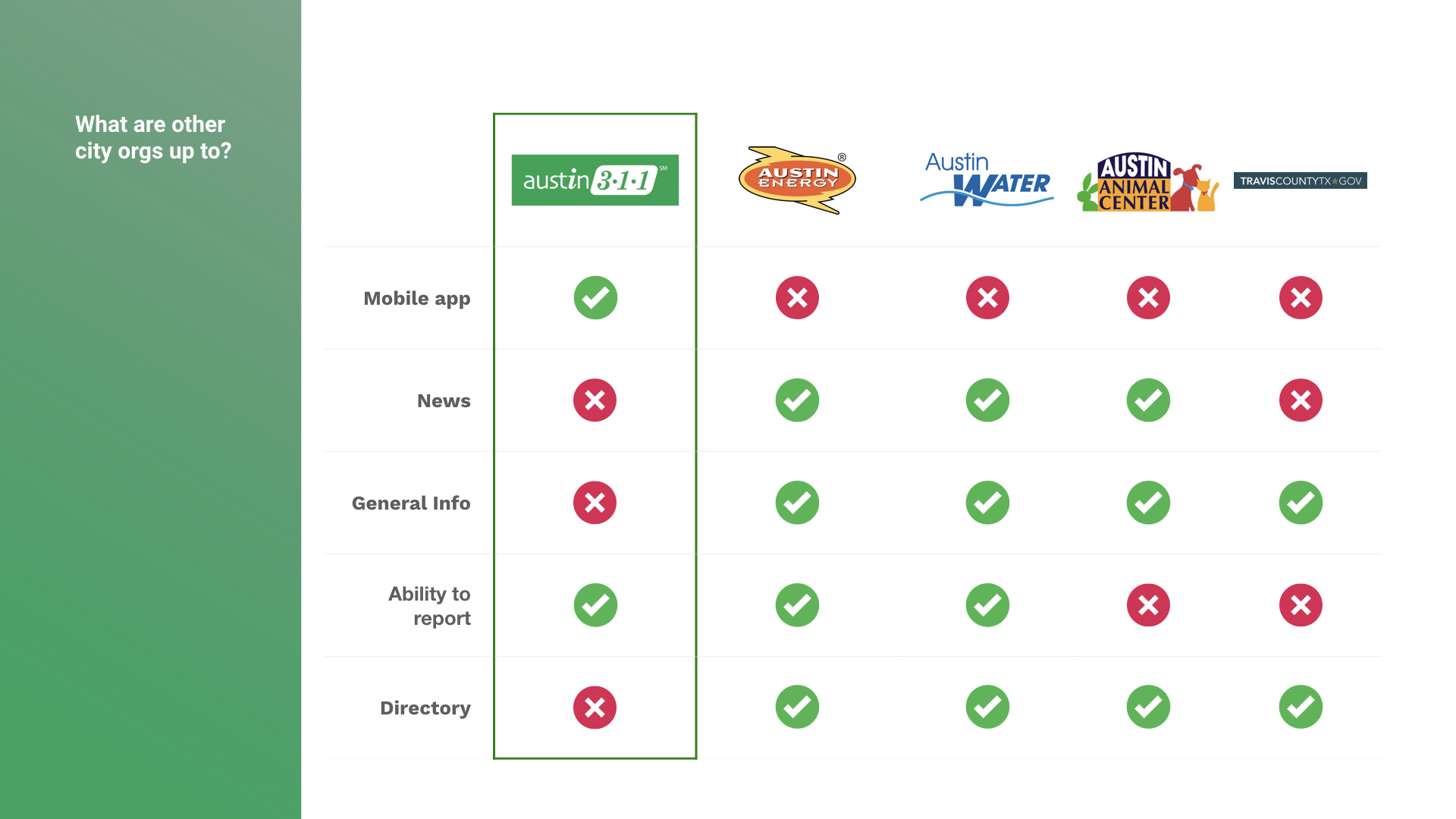 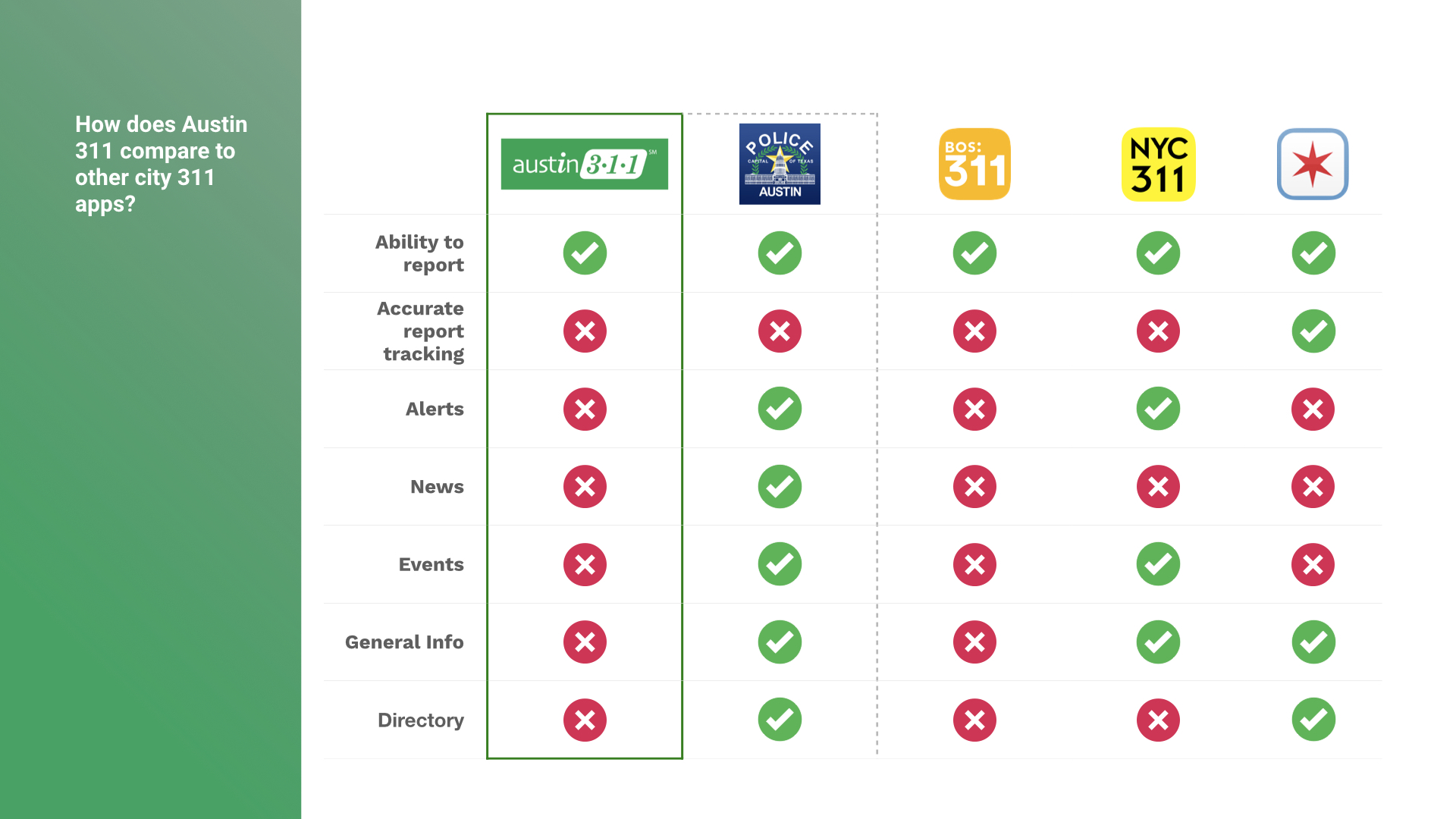 Users expect the status of their issue to match the status the app displays.

But it doesn’t. Reports are marked as closed after they are forwarded to the appropriate city department, not when the issue has been resolved. This gives residents the impression that their city actively ignores issues like a broken sidewalk—a threat to the safety of their playing children.

If Austinites perceive a tool, intended to simplify easy access to city services, as a discouraging collection of neglect, how does that affect their trust and respect for local government and their engagement within the community?

Timelines for issue resolution vary based on the department’s workload and severity of the issue. Timeline expectations and other department-specific information, when provided, appear in a popup window that precedes the form for a new request. After dismissing this notification, a mandatory action to proceed, users lose access to the most informative text in the process. This process revealed that the experience fell very short of the goal to provide uncomplicated access to city services and information.

Poorly organized information consists of ambiguous home screen options and settings, the lack of transparency on request status, and the absence of helpful, informative content. The absence of followup options requires citizens to spend additional effort and time to find answers, which leads to frustration and wasted time.

How might we help citizens feel they are heard and cared for when they report issues to Austin 311?

In the peak of Austin’s population growth and blossoming tech hub reputation, Austin 311 provides clear and easy access to city services and supplies citizens with helpful resources that are understandable and tangible.

New request categories are visually represented with icons and match common naming conventions which can easily be searched. The new request details page offers the same timeframe information mentioned above and allows you to include your information or submit anonymously as well as opt-in for a follow-up call and/or email.

We developed a wireframe prototype that we tested with four users.

The data that surfaced in our usability tests, although surprising, affirmed the main objective and expectation of the app as a service request tool.

¾ of users stated they would not use the Austin 311 app to find emergency and time-sensitive alerts since they already get that type of information from more reliable, up-to-date sources. They expressed the expectation to see information regarding events and festivals that would impact road accessibility.

The majority of users were uncertain of the requirements to provide their contact information.

One of the more subtle insights had a huge impact: the expectation to allow users to set their language.

I simplified the home screen by removing the confusing requests tab and the emergency and time-sensitive alerts. I added a calendar feature so users could plan for future events and scheduled road closures.

I added verbiage explaining the use of their contact information and displayed their information that would be shared if they chose to include it.

I added a language option to the app settings. Language barriers are unacceptable for a tool looking to encompass all Austin residents, including our large Spanish-speaking population. 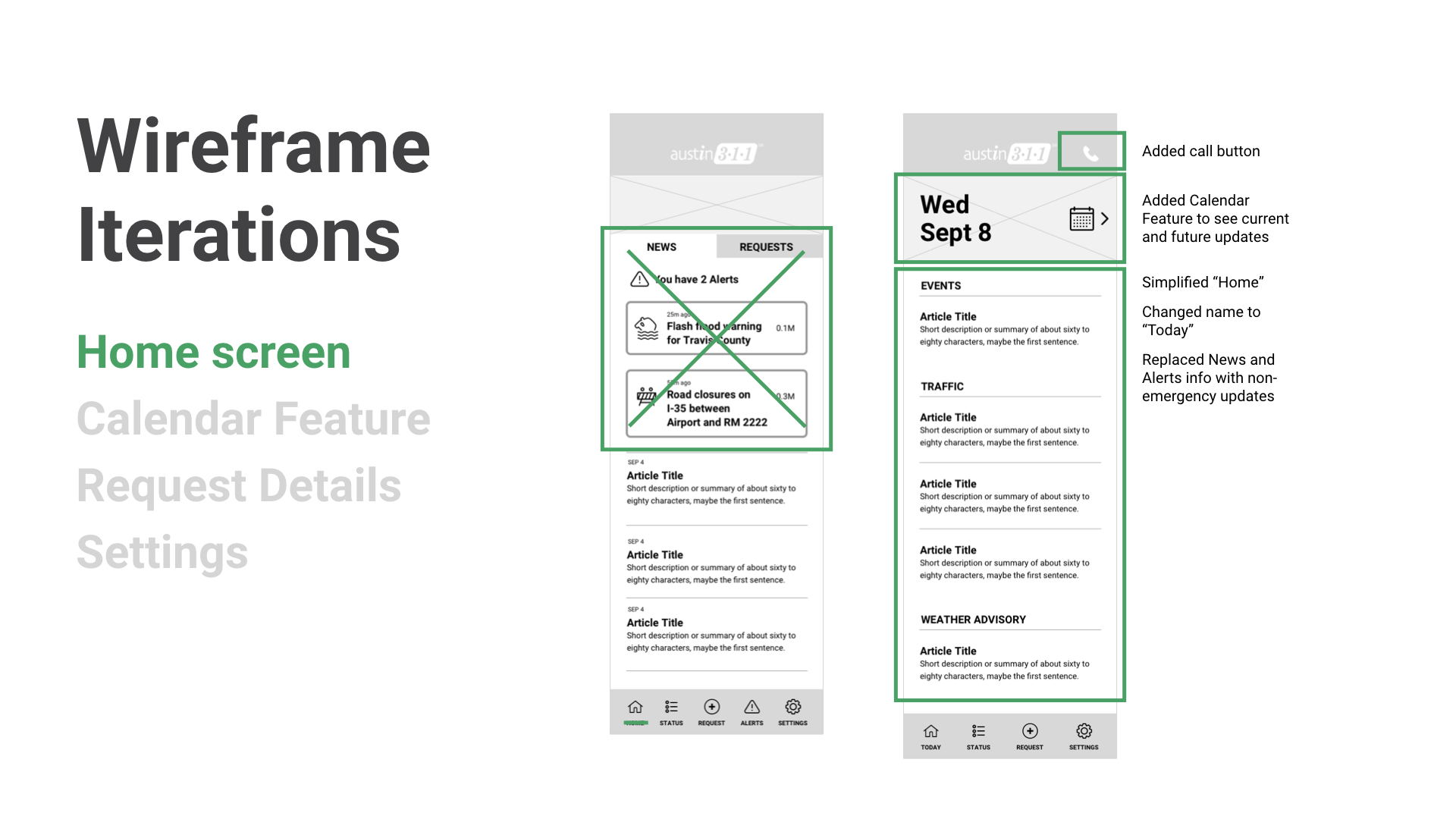 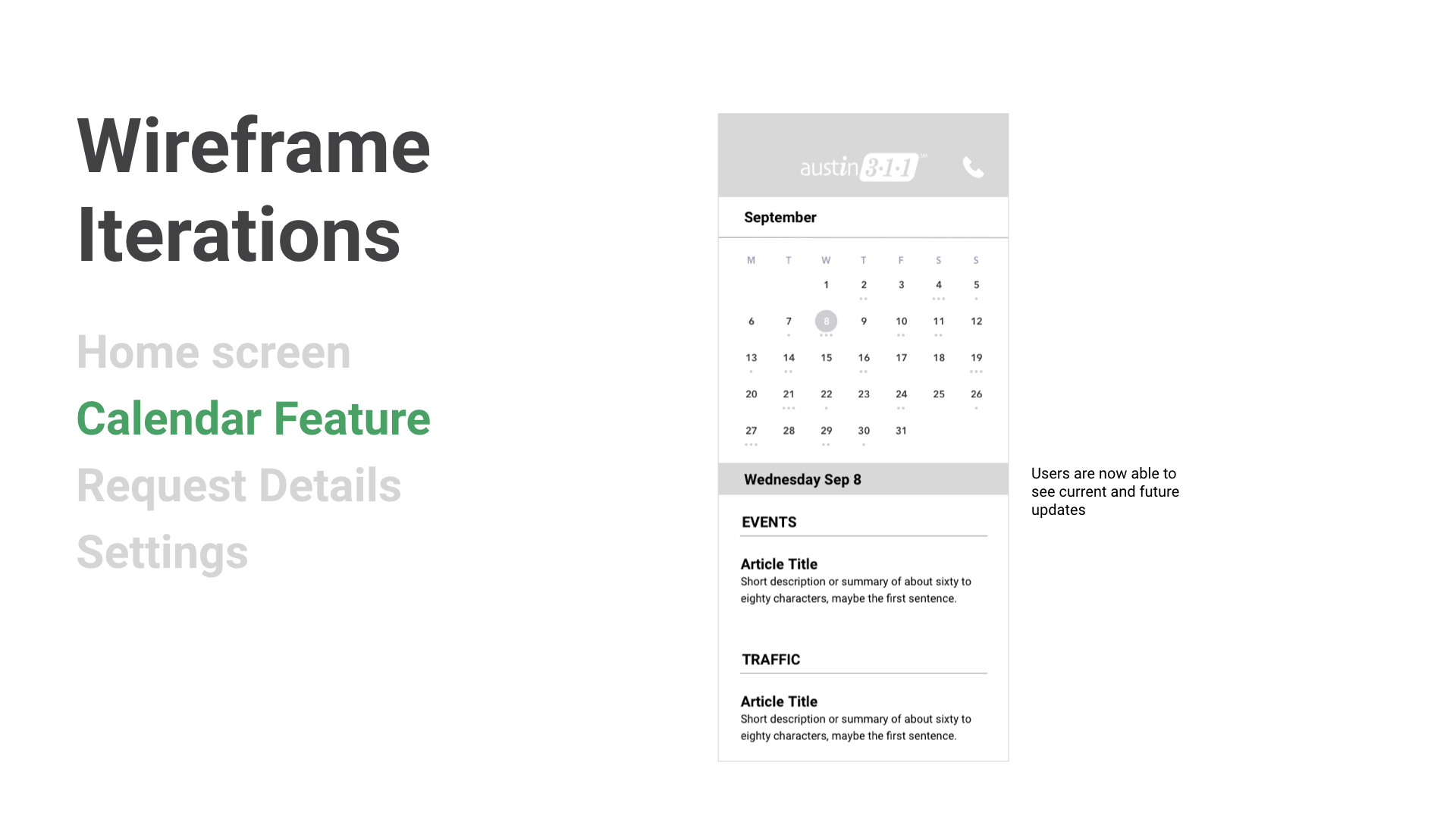 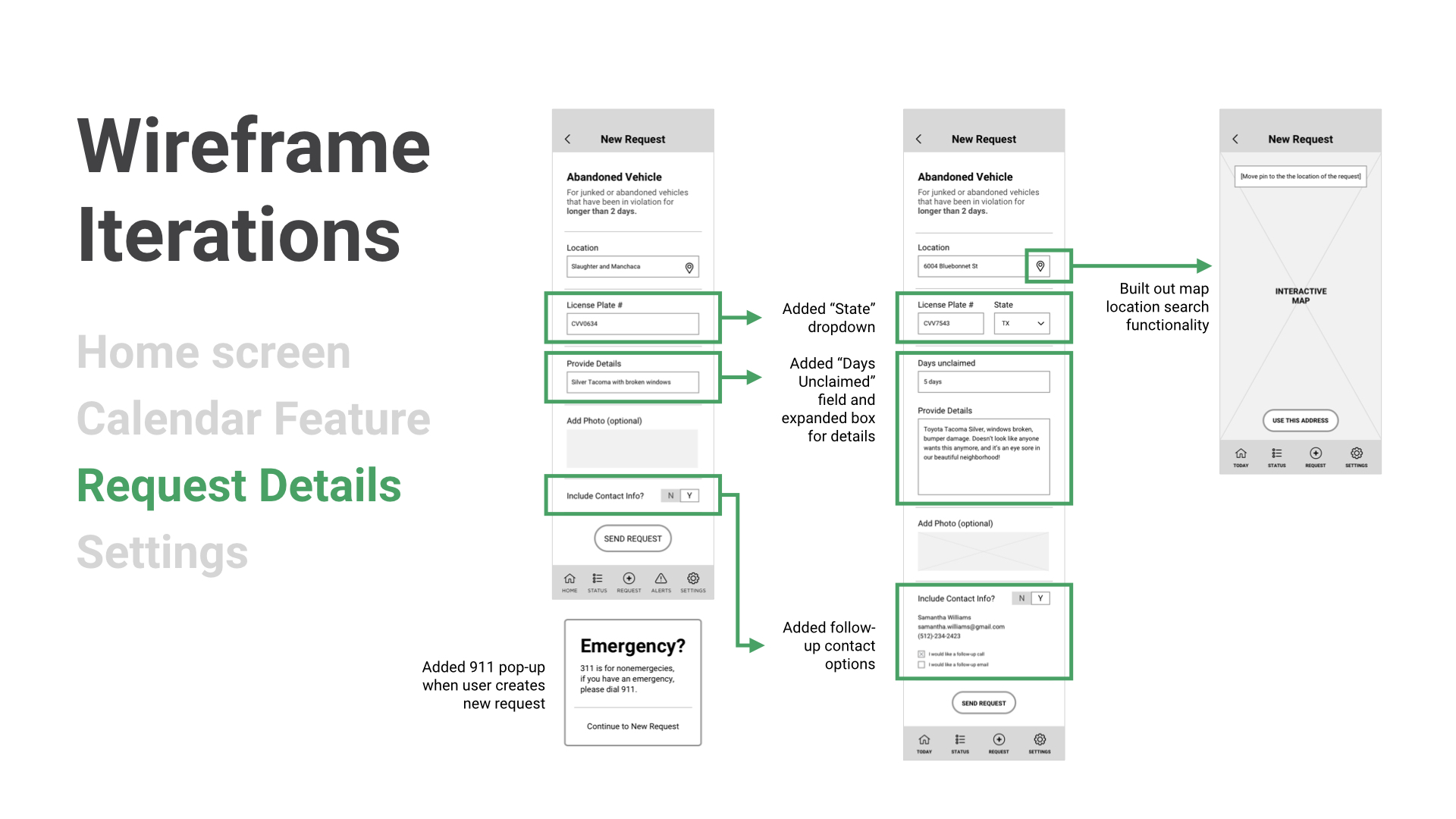 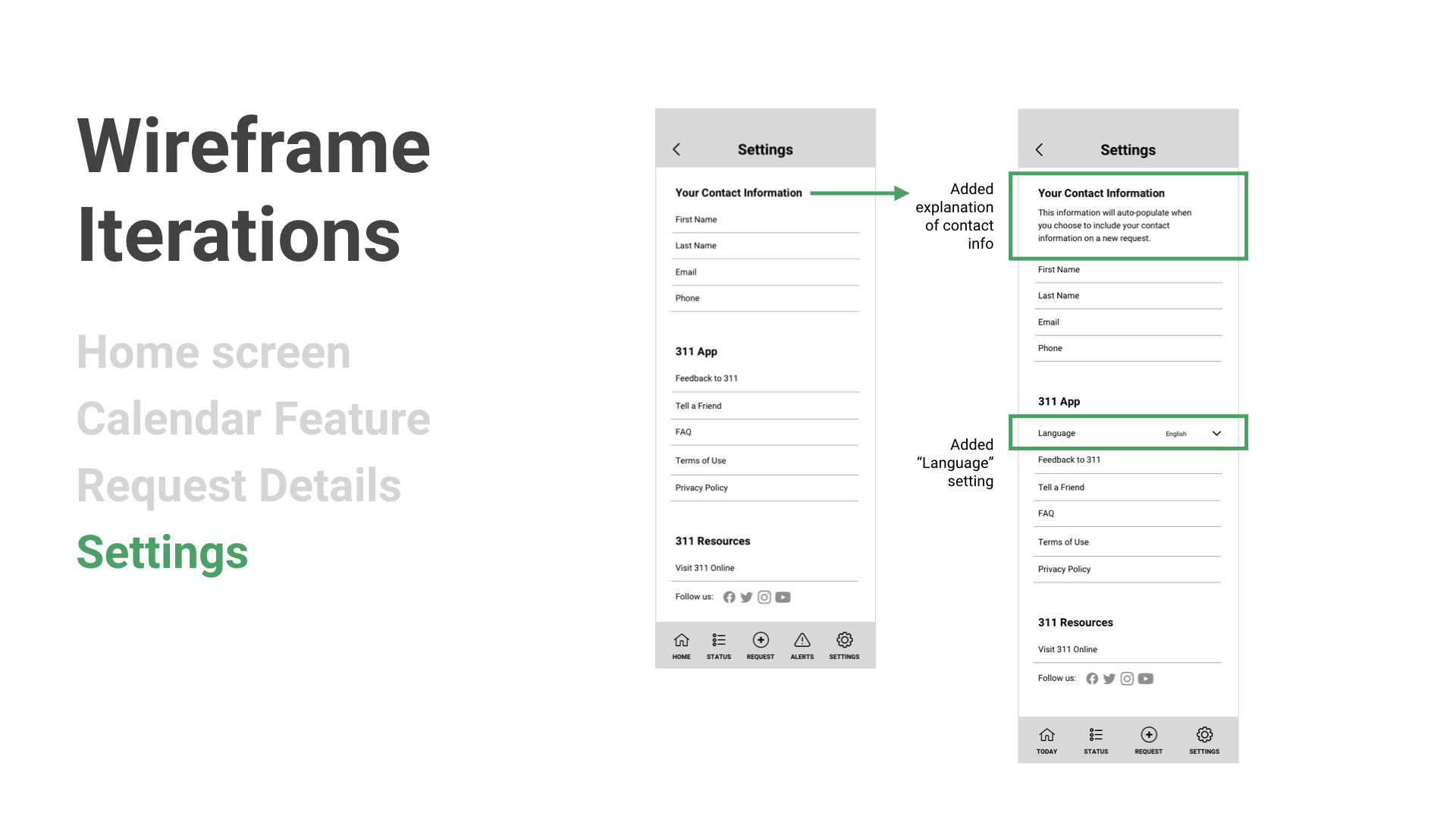 Impact and Next Steps

During initial ideation one of our pie-in-the-sky ideas was a very simple home screen that displayed a text input you could either type or speak your need into. This would generate specific search results relevant to your request.

Since our initial pitch, a passionate stakeholder connected us with two city employees interested in our solution. We’re looking forward tot he opportunity to get additional feedback from people.